In Medieval Bohemia, brewing was a right bestowed only by the king. The quality of each batch was closely observed, and each small brewhouse had its own character and variety of offerings. By the 18th century, modernization and the local development of lager-brewing further established the area as the capital of beer.While Diversity gradually gave way to a more homogenous approach, through most of the 20th century Bohemia continued to offer arguably the very best, most consistent beer in Europe.

But with the fall of communism and rapid rise of capitalism, general quality quickly deteriorated. Small breweries were crushed by newly internationalized giants, and Bohemia’s traditional lager soon evidenced only a faint hint of its former glory.

This century, a handful of new breweries have sprung up, offering a return not only to real, quality lager, but to stylistic diversity as well. In keeping with the international nature of the craft boom, two Prague neighbors, a Czech-Canadian and a US expat, decided to start a new company, inspired by the medieval Bohemian model of diversity and local character as well as the modern American model of creativity. Two Tales hit the ground running a few short years ago, with a focus on creating the very finest-quality traditional Czech pivo—with the odd twist. 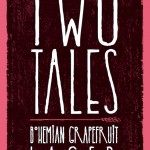