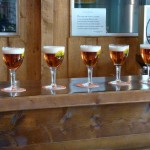 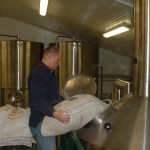 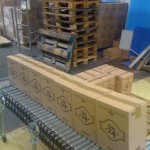 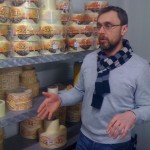 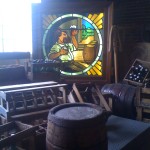 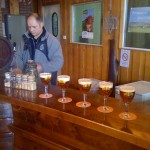 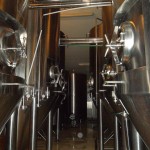 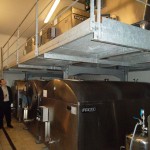 All of our brewers have something to teach us. But it’s not often that an enthusiastic brewer turns us on to something as strange and cool as Hildegard of Bingen, a woman of the Rhine River Valley (now Germany) who was packed off to a Benedictine monastery at birth, and eventually became the founder of a convent, a theologian and philosopher, a musical composer, a scientist and healer, a pioneer of holistic medicine, and, more or less, the progenitor of the women’s liberation movement. Way back in the 12th Century A.D., a time when women were regarded as little more than property, hardly ever educated, and generally unable to read or write, Hildegard gave counsel to popes and kings, and produced many important works in a range of disciplines. She is considered by many to be the first writer ever to describe the female orgasm, and was known for her positive views on sex (not typical of the Roman Catholic Church at that time, or since). You can find a lot of interesting info on Hildegard on the so-called Internet … here, for example.

What particularly interests the founders of the Brasserie St. Germain is Hildegard’s writings on hops. She was an early advocate of hops in brewing, and in that way too she was out of step with church doctrine. (Before hops came into wide use, beer was usually laced with gruit, a mixture of spice and herbs; the Church had the exclusive right to make gruit in some places, and so railed against the use of hops.) Any serious history of hops must mention Hildegard of Bingen. Check it out.

The brewers of St. Germain see themselves also as defenders of the hop flower, in opposition to the brewing orthodoxy of their region. That region, French Flanders, lays claim to France’s ancient bière de garde tradition. But the St. Germain brewers are of the opinion that most of the beer of the region in modern times is too sweet, and certainly not hoppy enough. They are fans of hoppier Belgian beers, and they’ve taken a healthy part of their inspiration from the Belgians. But they also see their hoppier beers as a return to the brewing heritage in French Flanders.

At the outset of the 20th century, there were more than 2000 breweries in this tiny region, many of them undoubtedly making refreshing, drinkable farmhouse ales, using great loads of local hops. Two world wars nearly killed brewing in French Flanders. By the end of the last century there were only about 20 breweries left, and there was no one left who remembered how those original bières de garde tasted. The Brasserie St. Germain, which opened in 2003, is part of a small revival of brewing in French Flanders. There are about 30 breweries now, including the Brasserie Thiriez, which is fighting along with St. Germain to put hops back into the local beer.

At bottom, the mission of the St. Germain brewers is just like that of most of the brewers we represent at Shelton Brothers. When asked to describe the brewery’s ‘philosophy,’ brewer Stephane Bogaert replies simply that, ‘We make the beers we like to drink.’ In France, then, just as in Belgium, a pattern is beginning to emerge. As the bigger breweries go increasingly bland, brewing to suit the tastes of the lowest common denominator and relying more on marketing than quality work to make a living, a corps of independent passionate beer drinkers and homebrewers, unable to get the beer they really want to drink, have determined to make that beer themselves. And the people are starting to understand the difference. After only six years, St. Germain has made its mark, and grown. It is now, indisputably, the most awarded brewery in France. Put that down to the power of hops.

The Reserve Hildegarde beers, a Blonde and an Ambrée, are of course a special tribute to the revered abbess who lived and loved hops more than 800 years ago — well before they were so popular. They are generously-hopped with Brewer’s Gold (what the St. Germain brewers call ‘B.G.’) and a lesser known variety called Strissel Spalt, both grown in northern France, and are a good bit stronger than the other St. Germain beers.

In fact, the brewery itself is a tribute to Hildegard — which brings us to the subject of that unusual name, Page 24, that the brewery has put on every one of its beers. Stephane explains that it refers to one of Hildegard’s works, a treatise entitled ‘The Benefits of Beer,’ that has vanished in the modern era, but remains part of the legend of the famous lady. On page 24, according to legend, she revealed a great secret, which men have fought to obtain for generations. Historians tell us that much of the legend is really myth; Hildegard didn’t do everything that her admirers and adherents claim. Did this book ever exist? Possibly not, say the brewers of St. Germain. But does that really matter? Even if it never existed, they say, it should have.

As for the wonderful secret of Page 24 … It may never be known, but one gets the feeling that the brewers of St. Germain believe they know what it is. Stephane tells the story of his grandfather and grandmother, who lived in French Flanders, sleeping on pillows that were stuffed with local hops. Hops, as Hildegard pointed out, have superb calmative properties. Perhaps the secret is that simple: whatever it is, you can make it better by putting in more hops. 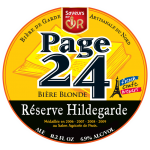 The Reserve Hildegarde beers, a Blonde and an Ambrée, are a special tribute to Hildegard of Bingen, who lived and loved hops more than 800 years ago – well before they were so popular. They are generously-hopped with Brewer’s Gold (what the St. Germain brewers call ‘B.G.’)…