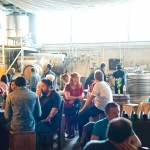 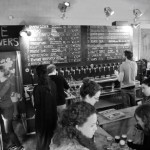 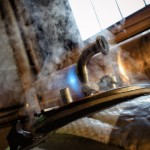 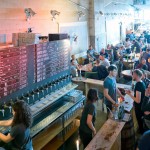 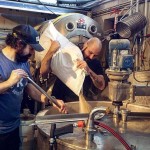 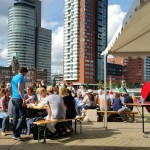 Kaapse Brouwers is a brewpub in Katendrecht, a district of Rotterdam, also known as ‘De Kaap’. In fact Kaapse Brouwers translates as ‘Brewers from De Kaap’. It opened in May, 2014 as a collaboration between Tsjomme Zijlstra of Fenix Food Factory (www.fenixfoodfactory.nl) and John Brus & Menno Olivier from Brouwerij de Molen.

The beer names are inspired by the history of Katendrecht. They are characters, that tell the stories of the original inhabitants of this part of town, but also of the more recent members of this community. For instance ‘Kaapse Karel’ translates as ‘Karel from the Kaap’. Think Jenny from the block 😉   Kaapse Brouwers tries to be an active player in the connection between the different populations at Katendrecht. The Kaapse Kitchen is an example of a community project in which grandmothers of all cultures invite neigbors for dinner at Fenix Food Factory.

Katendrecht became an important port about a century ago when Chinese boats arrived. Soon it had the largest Chinese community in all of Europe. By the Second World War it had also earned a name for itself as Rotterdam’s red light district, eventually becoming the largest in the country. During the Nazi occupation, the Germans posted signs saying ‘No entry for German soldiers’. They did not want their soldiers to visit that part of town for obvious reasons. In essence Katendrecht became a free state, with prostitutes, opium, and forbidden jazz. After liberation, American and Canadian soldiers were also forbidden to go to that part of town by their superiors. By the 1970’s, the shipping business was no longer doing as well in Katendrecht and the area declined further.

Today Katendrecht is doing extremely well and has brushed off its rough past to an extent. It is now one of the hottest places to live in Rotterdam. The neighborhood is a successful mix of the original inhabitants, immigrants and a new group of young people whom together form the new community of ‘De Kaap’. 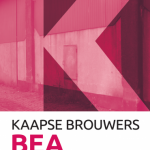 From the brewer: “An almost black beer with a nose of American hops and slightly sweet rye. The taste begins with passion fruit and citrus and ends bitter dry with delicate roasted flavors.”