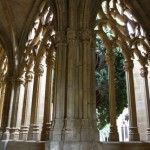 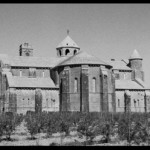 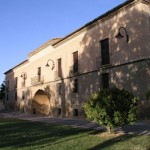 “In 1134, King Garcia Ramirez requested the Cistercian monks’ return to the south of Navarre, from Burgundy. In his offer, he granted lands at the banks of the river Aragon and at the gates of the Bardenas Reales desert, a region today known as Tres Riberas. The King provided the monks with what they needed for their development and expansion but the work to build the abbey, and winery, took considerably more time than it did to bottle the first vintage that very same year. From the outset in 1134, the monks made wine.

With 869 years of history, this is the oldest continuously operating winery in Spain. They grow their grapes on granitic and sandy soils, with a profound quantity of round river stone in the topsoil. They work naturally in both the vineyard and winery. Cement tanks are used for fermentation and aging primarily, with some stainless steel employed in the process.

Monastery of la Oliva, declared a Historic National Monument on 24 April 1880. In the XIX century the Monastery was thrice abandoned. The first time following the war of independence in 1808 – they returned in 1814 – the second time they were assailed and expelled in 1820, returning in 1823.”