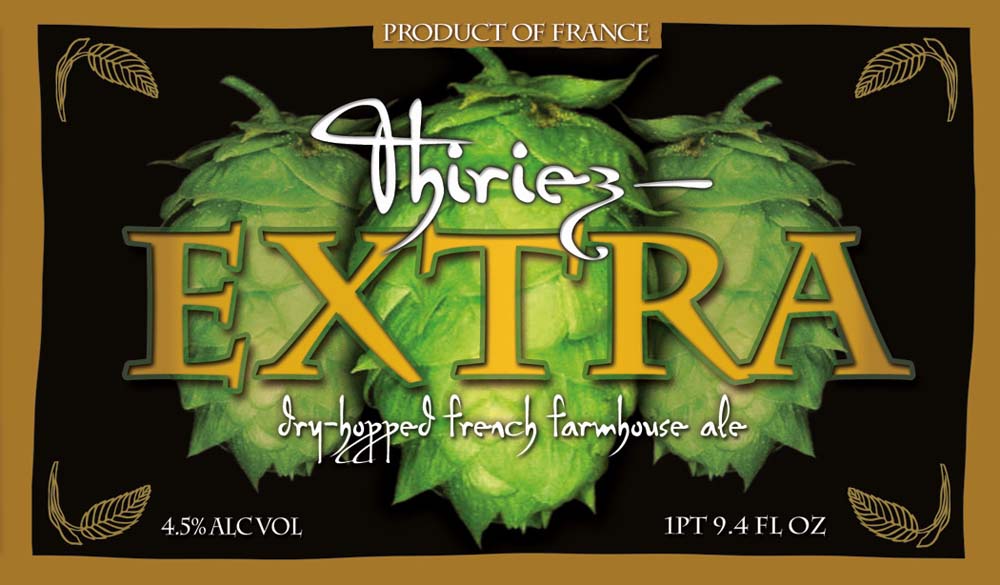 Mon Dieu, that’s good! This is one rich and très hoppy golden ale.

In France, this beer is called Les Frères de la Bière. We thought that that was a bit much for Americans to get their tongues around, and the brewer agreed with us that it wasn’t such a good name, anyway. But there is a meaning to Les Frères de la Bière. The Friends of Beer is an interesting project carried out under the auspices of the European Community — a collaboration between brewers in England, France, and Belgium, in which Daniel Thiriez, the owner and brewer at Thiriez, is very involved.

This particular beer is an interesting joint effort with an English brewery. It uses one hop varietal, a rather unusual hop grown in Kent called ‘Bramling Cross.’ The malt is from 2-row spring barley grown in France. (The English brewer is brewing to the same recipe, with the same ingredients, for sale in the U.K., under the French name.) The result has certain characteristics of an English bitter: it’s not too strong, very dry, and eminently drinkable. The idea is of course that you should be able to drink a lot of it over the course of a long sit-down with friends, in the English ‘session beer’ tradition. The English, of course, excel at creating deeply flavorful beer at a low abv — the ideal beer really, since you can enjoy that flavor rolling over your tongue for hours without leaving your lunch on the floor — and Extra is in that vein. With all those hops, you might even see Extra as a more traditional English IPA. Yet since Daniel Thiriez is a little ‘Belgian-oriented,’ by his own description, and uses a Belgian yeast that he obtained from the Belgian brewing school where he studied, the beer also has a good bit of the earthy, spicy character of a saison.

In fact, Thiriez Extra is much more like the original hoppy saisons that were created by Belgian farmers in earlier times. Those beers, meant to sustain the workers in the fields in the heat of summer, were always low in alcohol. It’s only in recent times that the standard saison beer in Belgium has begun to creep up past 4% into the 5’s and 6’s, and even to 8% in some cases. We view Extra as a throw-back to that earlier era. It may well be a throw-back as well to the time when there was no clear border between France and Belgium, and French bière de garde was probably very much like the Belgian saison. (Scholars know very little about what bière de garde was like, since it ceased being brewed sometime between the two world wars, and has only been ‘revived’ in the 80’s, without benefit of any model to work from. Saison brewing has been more continuous, though, again, changes have occurred since the style has been commercialized.) The Thiriez brewery is itself a bit of a throw-back — a classic farmhouse brewery that Daniel Thiriez purchased from a pair of brothers whose family had operated there for generations. It has been outfitted with more modern equipment, but it is wonderfully picturesque, and the yeast that Daniel carefully chose lends a classic farmhouse character.

It helps also that Daniel is a brilliant brewer.