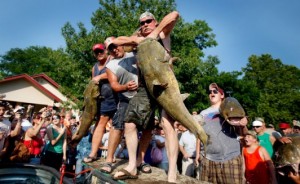 This Saturday don’t miss the High & Mighty Beer Show #62 at 3:30pm.The Shelton Brothers are known for their formidable portfolio of beers from Europe, Asia, and Oceania, but this week they discuss their distribution and exportation of American brew, in particular theBelgian-influenced funky offerings from Oklahoma’s Prairie Artisan Ales. Easy-going midwesterner Chase Healey, brewmaster at P.A.A., graciously takes the call during an airport layover, only to find that the Bros are as interested in wild catfish grabbin’ (you know, “noodling”‘) as they are in wild beer!
Listen live on WHMP AM1400 & 1240 and FM96.9 or get the podcast here: http://whmp.com/pages/11904106.php?