The Dark Side of the Holidays 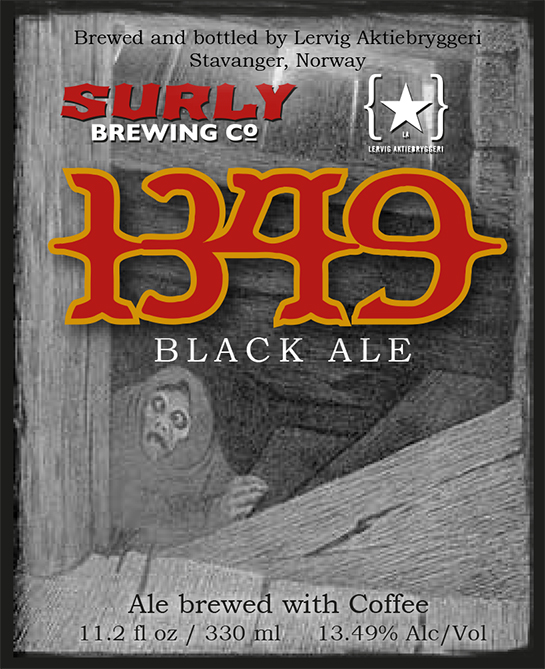 It’s the height of the season, and hearts are full of glad tidings in every state where Shelton Brothers holiday beers are available. In this most festive and joyous of times, it’s easy to forget that all those iconic images associated with December celebrations weren’t created by Hallmark or Heineken. Nay, their origins are ancient, mystical. And, as everyone knows, there was always a dark side. So while you savor your next comforting sip of Santa’s Butt, allow the bad elves in Belchertown to get all medieval and mythological on your ass with these new offerings.

It could be said that Death Metal was born in the 14th century, when the Bubonic Plague ravaged Norway. Surely rebellious local teen lute players sang about it while drinking murky ale. And today the Black Death, stringed instruments, and dark Scandic beer are gleefully reunited, thanks to a semi-satanic alliance among Norwegian metalheads 1349, Minnesota brewery Surly, and roving American expat beer-maker Mike Murphy. The unholy seed was planted when 1349 fan Tod Haug of Surly discovered that the band members were serious craft-beer geeks. In fact, the musicians had ambitions to go beyond beer fandom, and they sought a sympathetic local brewer with whom they could collaborate to create a signature band brew. Enter Murphy, a roving zymurgist who’d recently left the Rome Brewing Company to join the Lervig Aktiebryggeri, in the Norwegian town of Stavenger. And thus, the triangle was complete. Haug, Murphy, and the 1349 guys all had a hand in creating the recipe, and all participated in the brew session.

The resultant beer, called simply 1349, is a big, black ale, fermented to … wait for it … 13.49% ABV. How much more black can you get? As Spinal Tap might say, “None … more black.” According to the lads, “The 1349 Black Ale is our Strange Old Brew; an absolutely massive beer with all the power malts, hops, and freshly ground espresso coffee has to offer, and rounded off with a distinguishable note of apocalyptic delicacy.”

Drink at your peril, in 330mL bottles and 30L KeyKegs.

From the Norway of America, Alaska, comes some equally spooky new stuff: Celestial Mead’s Persephone’s Fate. Persephone was (as everyone who looked it up on Wikipedia this week knows) the mythical goddess of the underworld — which was convenient, as her husband, Hades, was the god of Death. While these distinctions didn’t garner either of them a lot of party invites, Persephone was at least, to her credit, also the goddess of spring growth, and she’s often depicted carrying a sheaf of grain. Her namesake mead features a hint of spring pomegranates — a nod to the original myth –and there’s more than a hint of indirect grain via this batch’s bourbon-barrel aging. At 14% ABV, you can enjoy some seriously tasty mead without getting more intoxicated than your friend drinking the 1349 Black Ale!

Speaking of the fiery underworld, Celestial has also sent us their Southern Heat, a 12% mead made with rare Tupelo honey from the Florida swamps. The alcohol and acidity balance the sweetness of this complicated mead, which offers flavors of spices, oak, and fruits. Word has it this is the last batch ever of this stuff, so order up.

And if you tragically miss out on these two Celestial beauties, we have a slew of other new and exciting meads in stock now, including their own Batch #73, which was aged in bourbon barrels for nine months.