As co-founders of a Spanish heavy metal band, Rafa Hereza (guitar) and Santi Bronchales (lead vocal) eventually came to realize they shared as much of an enthusiasm for craft beer as for headbanging. After many years of mixing la musica with la cerveza, they saw a brighter future in the latter, and in 2013 released the first commercial batch of Brønher Brew, made in Rafa’s home region of Cuenca. As luck would have it, Cuenca boasts some of the purest agua on earth, scientifically confirmed to have spent 500 years in the aquifer before reaching the spring—uncontaminated rainwater from half a millennia ago! That makes for a superb base for brewing, and in a few short years Brønher’s full, characterful and very well-made beers have won several awards, most recently at the 2016 Barcelona Beer Challenge. While the earliest offerings have been fresh takes on traditional styles, they’ve also required a subtle, twisted creativity and technical know-how in their use of multiple malts, temperatures, yeasts and fermentations. Meanwhile the uptick in Iberian interest for more adventurous stuff has seen Brønher lately venturing into small-batch experimental recipes and”kinkier” brews, including beer/liquor hybrids.

The guitar-shredder and the screamer have evolved into the brewer and the master blender (Santi is also a well-regarded spirits dealer) and we expect more great things from these locos.

The name? It’s a distillation not only of “Brothers/Hermanos” but also of the surnames Bronchales and Hereza. And the mascot, seen on all the labels? He’s just a freaky little drunk hop, also named Brønher. What do you expect from Spanish metalheads? 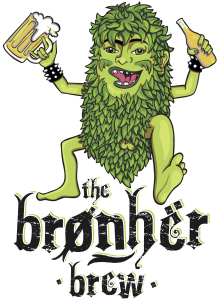