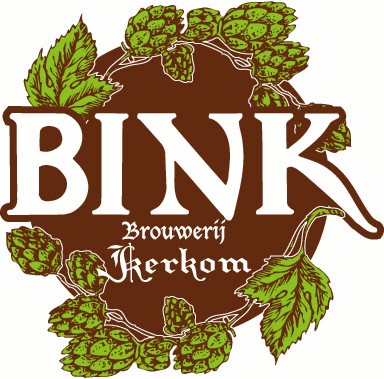 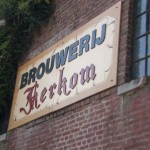 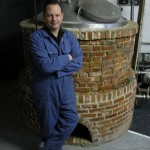 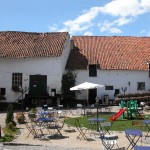 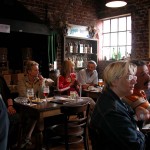 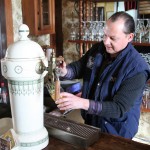 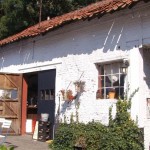 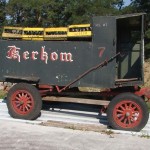 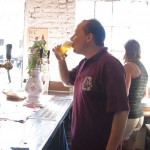 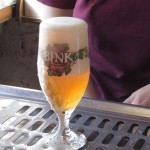 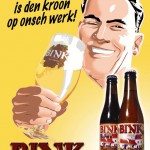 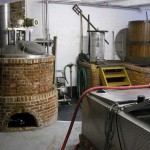 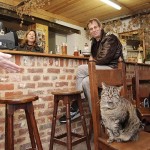 The old brewery at Kerkom is the quintessential farmhouse brewery, set amid cherry and pear orchards in the gentle countryside of East Flanders. Brewer Marc Limet and his wife Marina live here, brew here, and on the weekends, offer sustenance to throngs of visiting beer lovers. On warm summer days, people come from all over Belgium to sit in the great courtyard, sipping the brewery’s briskly bitter and refreshing Bink Blond, or the warmer, satisfying Bink Bruin. In the wintertime, smaller crowds of local admirers and friends huddle by the stove in the perfectly cozy pub that feels like an extension of Marc and Marina’s home.

If you happen to feel that the larger commercial breweries are going down the wrong path — losing their nerve when it’s time to add the hops, using more and more sugar instead of barley malt to make alcoholic but weak-bodied, sweet, characterless brews, and dramatically cutting traditional fermentation times in order to chuck out ever more product, ever more cheaply — you have a kindred spirit in Marc. Someday you should commiserate with him over a cool Bink Blond, lamenting the decline of once great beers, like Chimay Bleu or Duvel, and the rise of insipid, characterless beers like Delirium Tremens. Fortunately for you, however, Marc isn’t just stuck in the past. Like a number of other small farmhouse brewers in Belgium, Marc felt compelled to move from amateur brewing to a more commercial operation to counter the general trend of dumbing down in Belgian brewing. He takes his time and brews what he likes, and doesn’t use corn sugar, artificial fruit flavors, and other cheap ingredients in order to appeal to the broadest range of dabbling beer consumers.

Using mostly the older equipment of the old brewery, with a few modern additions, Marc makes full-bodied, slightly earthy, very dry beers. The two everyday beers, the Blond and Bruin, are all-malt brews of about 6% alcohol by volume.

The dry-hopped Bink Blond is Marc’s one-man crusade to put hops back into Belgian brewing. From the keg, the Blond is a bracing, unwavering direct shot of hops to the system — floral bitterness supported by a light but firm, very dry maltiness, and spiced by just a hint of typically Belgian yeast character. The unreserved hoppiness of this beer may remind you of an American West Coast IPA but, as Marc explains it, this is just the way most Belgian beers used to be. In the bottle, the beer takes on more nuances and becomes more complex. The classic Belgian “farmhouse” character develops over time in the bottle; you may notice a little wild yeast after a while. But still this beer remains supremely hoppy.

Bink Bruin, in keeping with the Belgian tradition of brown ales, is not a hoppy beer. Instead the emphasis is on dark, roasted, slightly smoky malt. Marc being Marc, this Bruin is a bit hoppier than most of its kind, but the balance is still tipped decidedly toward the wholesome, bready character of good malt. Still, it remains dry, with roasty flavors winning out over the sometimes cloying sweetness you find in some dark ales. Thus it is at once satisfying but refreshing and easy to drink.

Then there is the distinctive and winning Bink Bloesem, or Blossom. This is a dark, stronger ale with two special ingredients: locally produced honey and a thick syrup made from local pears — without sugar. The honey and pear syrup are allowed to ferment pretty thoroughly, yielding once again a predominantly dry beer, but one with just a little sweetness and a range of dried fruit and other subtle flavor nuances that you have surely never tasted in one beer before. Bloesem is a beer of real character and depth, one that you can linger over thoughtfully. It is dark and rich-flavored, yet light on the palate, at 7.1% alcohol by volume.

Winterkoninkske is Marc’s winter brew. The name refers to the Flemish word for the little bird pictured on the label, which means “Little Winter King.” Years ago Marc noticed in a book about birds a picture of a winterkoninkse perched on a sprig of hops. He decided right then that he would use the image for a winter beer if he ever came to have his own brewery. Now the beer is here, and the label is delightful – sort of a song dedicated to the upside of winter. The upside is, of course, the beer of winter. This one is typically dark, rich, and roasty, with a complex yeasty tang and a light spiciness. There are juniper berries in the brew. If there are other spices, Marc is not telling what they are. This is without question one of the best Belgian winter beers.

You’re probably wondering where the name “Bink” come from. It’s a slang term of endearment for a guy in the rustic area around Kerkom – kind of like the American “dude.” The typical character of a local Bink – a bit coarse but cagey enough to make his way in the world, is described in a common story. It seems that a certain Bink is plodding along the dusty road leading a cow by a rope, when he catches the attention of the constable. The constable recognizes instantly that this Bink is not the cow’s rightful owner, and confronts him. He demands, “Why are you walking off with that cow?” The Bink, looking very surprised, replies “Cow? I just found this piece of rope that someone left lying around. I didn’t notice that there was a cow attached to it.” In the end, the Bink lands in the klink, but his quick thinking under pressure is still much admired. There is a bronze statue of this famous Bink in the pub of the Kerkom brewery. 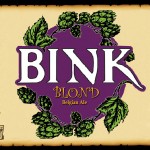 There is no other Belgian beer quite like Bink Blond. Dry-hopped and a lovely golden color, it is brewed by purists using only malt, hops, yeast, and water. Bink Blond is easily one of Belgium’s hoppiest beers, but it packs more malty flavor than you…