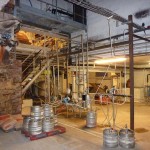 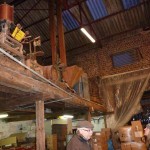 The small La Choulette brewery in northern France, just over the border from Belgium, is one of only a handful of traditional bière de garde breweries still standing in the beautiful farming country where they used to thrive. Bière de garde — in French, ‘beer for keeping’ — is France’s proudest original beer style, a sort of variation on the famous Belgian saison beers made nearby. In the days before refrigeration, it was traditionally brewed by area farmers in the cold months of winter and early spring, siphoned into heavy wine and champagne bottles, capped or corked, and placed in the cellar to age until the summer, when it sustained the farm-workers in their labors and when the heat made brewing impossible. The beer had to be strong and hardy enough for cellaring, yet light and refreshing enough to quench a farmer’s thirst at the height of the summer.  Today, modern bières de garde are most likely higher in alcohol than their historic counterparts but are still wonderfully refreshing and effervscent.

As for the brewery itself, La Choulette is a charming farmhouse brewery which dates back to 1885. The Dhaussy family had been brewing since the late 1800s but in 1951 Alphonse Dhaussy closed their brewery to concentrate on beer distribution. But in the 1970s, Alphonse and his son Alain had the opportunity to buy an old brewery and decided to revive traditional brewing there. In the 1980s Alain and his wife Martine took over the operations and are currently assisted by their daughter Florence. Today, La Choulette’s bières de garde, all cellar conditioned for a minimum of 4 weeks, stand among the greatest beers in the world.

La Choulette takes its name from a wooden ball used in a traditional northern French game that was a cross between field hockey and golf. 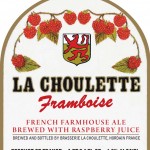 Some years ago, La Choulette brewer Alain Dhaussy thought to take his already famous amber biere de garde and add pure raspberry and elderberry juice. The resulting reddish-brown framboise captivated beer-lovers from the start. It is dry, only a little bit sweet, and redolent with…