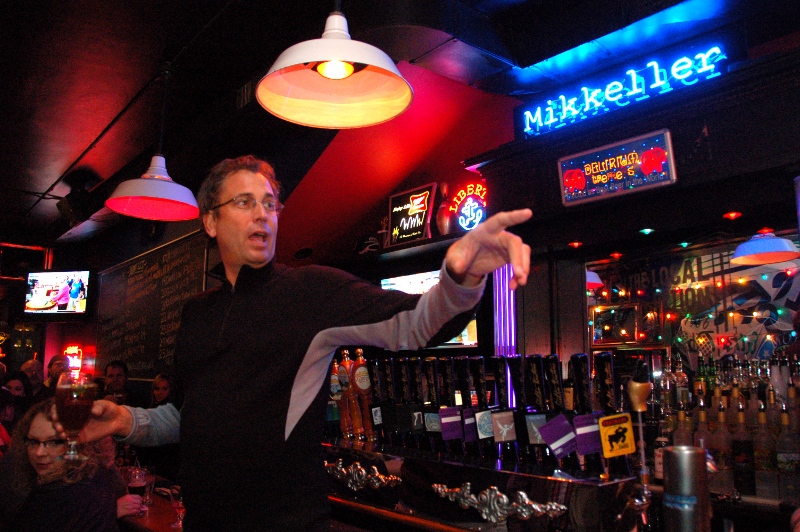 We’re dragging ourselves to the airport at 3am on Monday to cross a few time zones on our way to this year’s Craft Brewers Conference.  We’ll have events each night, where we’ll be joined by our friends from all over the world.  See you there, if we’re over the jet lag.

Sour beers from all over the place, including some Swiss offerings from our own Brasserie Trois Dames.  Have a slice with the brewer, Raphaël Mettler.  Starts at noon.

Come have a pint with the brewers from Fyne Ales (Scotland), Magic Rock, Ridgeway, and Siren (England).  It’s going to be a lineup of British Ales that will excite even the Beer Advocates.  6pm.

Join our favorite Italian maniac, Bruno Carilli of Birra Toccalmatto, at Falling Rock.  Bruno’s beers, among others, will be on tap and a couple of folks from Falling Rock will be releasing their new book on the Italian Beer Scene.  5:30pm

Prairie and Perennial will be at Star Bar for the debut of their collaboration, Dual Artisanship.  Other beers from Perennial will include Aria, Sump Coffee Stout, Trixie, while Prairie will have Birra and Weisse.

SHELTON BROTHERS: CITIZENS OF THE WORLD

NIGHT OF THE SAISONS

Our friends from Jandrain-Jandrenouille, Nøgne Ø, and Trois Dames will be on-hand early to talk Saison.  5:30pm.

Don’t miss this one.  Dieu du Ciel!, Prairie, and Siren will be pouring their own wares, while we man a Shelton Brothers table featuring Anchorage, Cantillon, Drie Fonteinen, Jolly Pumpkin, Mikkeller, and Trois Dames, plus a couple of ciders from Oliver’s and Ribela.  More info here:  http://www.eventbrite.com/e/what-the-funk-cbc-denver-2014-tickets-10827919599 6pm

NIGHT OF THE BARREL

Thirty barrel-aged beers on tap, including a couple from our friends at Siren Craft Brew. 5:30pm

Falling Rock
NIGHT OF THE SOURS

Crooked Stave, Jester King, and Trois Dames have started a round-the-world collaboration project for which they’ll brew the same beer in Texas, Colorado, and Switzerland, then letting the local yeasts take over for unique end products.  Join them after their brew day at Crooked Stave to try some special beers from each of the brewers.