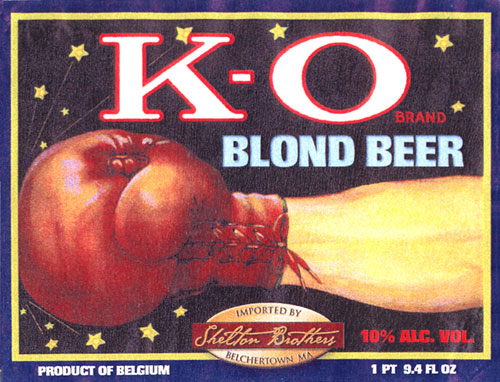 K-O is the latest invention of Dirk Naudts, one of Belgium’s leading brewmasters. For years, Dirk has been coming up with winning beer recipes for breweries large and small throughout Belgium and Holland. (You would be amazed at how many beers with other people’s labels on them were actually created by Dirk.)

Meanwhile, of course, there’s the beer to talk about. When we first tried it, a year or so ago, K-O was a pretty good blonde ale, with deceptive strength and a black-and-white Xeroxed label that, frankly, really sucked. But then, by chance, when Brother Daniel was poking around the Pike Place Market in Seattle, he found an antique label for a now-defunct apple orchard called K-O that really made a punchy statement. Our good friend Paul re-worked that label a tad, we convinced Dirk to add a few extra shovel-fulls of hops to the brew, and there you have it: a bottle of beer that anyone can understand.

The name says it all. This fabulous golden ale will knock you on your can. But K-O delivers more than just an alcoholic punch in the face – this is real beer, with pure malt and hops, body and character, not just a metric ton of fermented candi sugar.

But please, watch out for that sucker punch. It looks so light, so blonde, so harmless. Floats like a butterfly, stings like a bee.

Other Beers by De Proef