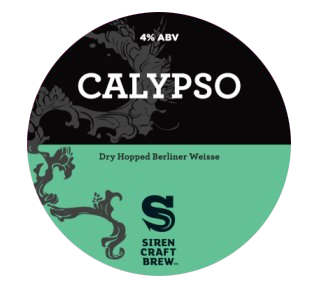 “Calypso; a Greek goddess sought to detain Odysseus on his return home to keep as her lover. Odysseus, being a mere mortal could not argue or resist the desires of such a beautiful goddess. However, her temper with the gods at their request to free Odysseus and set him on his way, makes her infamous as the goddess with a sharp tongue.

From this ancient story the name Calypso is given to our range of dry hopped Berliner Weisse. Each batch will be created with a different single hop variety – 7 different hops telling 7 different stories for each year that Calypso kept Odysseus captive.”