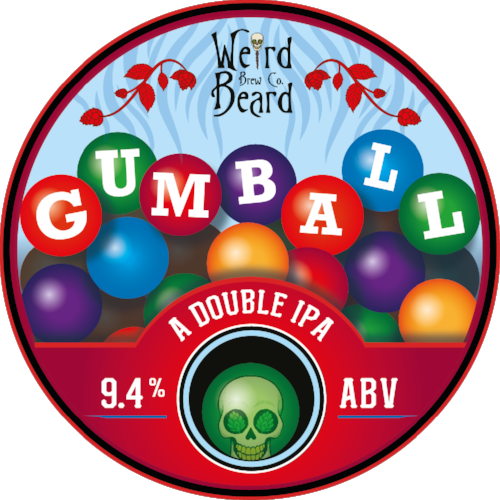 “IT’S A TRADITIONAL DIPA IN ITS COMPONENTS BUT NOT IN ITS COMPOSITION. AS YOU CAN TELL FROM THE ABV, THIS IS A BIG BEER BUT ITS DRINKABILITY BELIES ITS STRENGTH.

We’ve kept the malt bill simple, with a combination of pale malt, lager malt and oats. But we brought it all together with a long, low temperature mash, which maximises the fermentability of the wort, and dries out the beer. The secret of a good DIPA is to hit a low final gravity, to take the weight out of the final product.

You will taste some sweetness here but that’s from the hops, rather than the malt. We were trying to recreate memories of gumballs sucked on during childhood outings to the arcade at the British seaside. We took Centennial and Simcoe from the American camp, and Motueka and Galaxy from our Australasian cuzzies to culminate in an intense fruit cocktail.

The hop selection was critical here, but we also treated them a little differently this time around. Rather than adding the hops to the end of the boil, we lowered the temperature and let the hops stand in the wort for an hour. This clever technique is (unsurprisingly) known as a hop stand and its purpose is to retain more of the hop oils.

Then there’s the double dry hopping. Instead of putting all of the dry hops in towards the end of fermentation, half were added immediately after high krausen (when the yeast is at peak activity). The biotransformation of the hop compounds releases intense fruitiness that would otherwise remain locked in. Upon final gravity, these hops were dropped out and we hit the beer with a second dosage. To get the most of this addition, it was recirculated in the fermenter a number of times.

The bitterness hasn’t been neglected either, thanks to our typical first wort addition, which is always on the generous side. This creates a definite bite to balance things out and imitates the tang you get from a gumball.

IT ALL COMES TOGETHER TO CREATE A DIPA THAT GOES DOWN JUST A BIT TOO EASILY.

YOU REMEMBER HOW TO PLAY. PUT YOUR COIN IN, PULL THE LEVER, AND LET THEM DROP.”