Moor Beer Company was started in 1996 on a former dairy farm in the Levels and Moors area of Somerset. Brewing started originally on a 5 barrel plant, with beers designed to reflect the local heritage. They gained in popularity and began to notch up quite a few awards. One of our most celebrated beers, Old Freddy Walker, went on to win CAMRA’s Champion Winter Beer of Britain in 2004. Other beers, such as Revival and Hoppiness, continue to win regular awards at SIBA and CAMRA beer festivals.

The brewery became a bit of a victim of its own success and temporarily contracted out brewing. In January 2007 the brewery was relaunched and expanded to 10 barrels when Justin and Maryann Hawke took over the company. They worked (and continue to work!) tirelessly with their small team to restore the reputation of the brewery to the status it richly deserves. With award winning branding, some of the highest rated beers in the world, and huge international demand, the brewery was expanded again in 2011 to a 20 UK barrel brew length, and a bottling line was installed.

Although lacking a West Country accent, Justin brings a passion for beer and the local area, as well as a tendency towards fusing the wonders of real ale with the aggressively flavoured beers of his native California. Since taking over brewing, Justin has radically improved the quality and flavour of the old beers while adding many new beers to the core range and producing a number of interesting speciality beers. His reputation and awards have grown rapidly, resulting in Moor Beer now being regarded as one of the top breweries in the UK.

We strive to produce strongly flavoured beers of exceptional character. All our beers are brewed using only natural ingredients. We put a lot into our beers by using the finest malt, hops, yeast and water – but don’t take anything out. All our beers are unfiltered so they retain the yeast that is so vital to producing exceptional flavour, as well as providing vitamins. 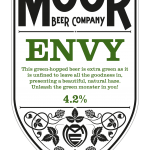 From the brewer: “Envy is our green / wet hopped beer. We first brewed it in collaboration with Nicholson’s pubs in 2011. Of course the idea was to showcase the impact of wet hops versus dried ones so we made the base beer a very…