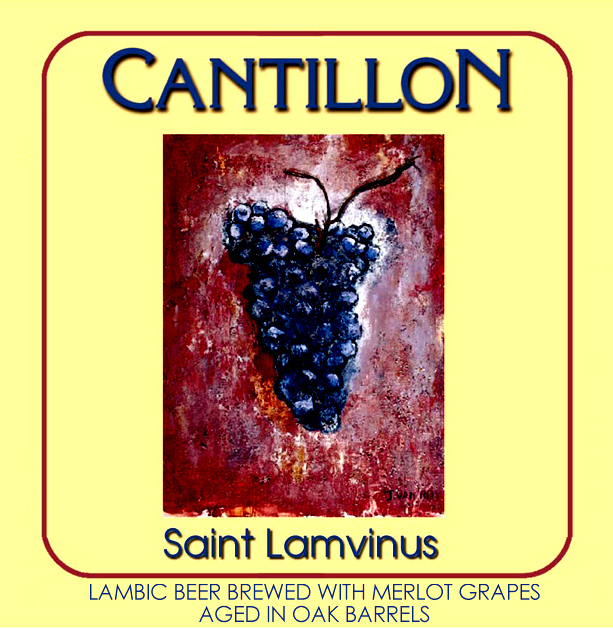 Beer or wine? St. Lamvinus is a two-year-old Cantillon lambic fermented in oak casks along with wine grapes from France, and siphoned directly into 750 ml champagne bottles. The type of grapes used, and the winery in France that supplies them, are different every year.

This beer has been offered irregularly for several years, and its quality has been somewhat variable, but in the last three years it has become an annual event, and a dependably extraordinary drink. The name is a small pun: ‘lam’ referring to lambic beer, ‘vinus’ being, of course, the latin for ‘wine,’ and the whole thing, ‘St. Lamvinus,’ meant to remind you of St. Emilion, one of the most fabled wine appellations in Bordeaux. It is in essence a union of wine and beer, and though it is not the only such (see, for example, <strong><a href=”http://www.sheltonbrothers.com/beerProfile.asp?BeerID=42&x=19&y=12″>Cantillon Vigneronne</a></strong>, the <strong><a href=”http://www.sheltonbrothers.com/beerProfile.asp?BeerID=77&x=16&y=14″>Druivenbier</a></strong> from Paeleman in Belgium, and a very rare grape lambic once made at Drie Fonteinen), it is certainly the most elegant. It is the fruit of master brewer Jean-Pierre Van Roy’s passion for wine and his close friendship with a number of France’s best wine-makers.

In 2001, St. Lamvinus was a two-year-old lambic fermented with a blend of cabernet sauvignon, cabernet franc, and merlot grapes – a typical Bordeaux mix – from the famous Château Belair. Our wine guide (an old Schoonmaker) describes Belair as “one of the best premier grand cru classes of St. Emilion.” This château has been owned by the same family for generations, is planted almost entirely with Merlot and Cabernet Franc, and produces about 5,000 cases a year of some of the best and most expensive wine in the world. The only problem is, they don’t have a lot of grapes to spare. In previous years, Cantillon had managed to put about 50 kilos of grapes in each cask of lambic. In 2001, the brewery was able to get just enough freshly harvested Belair grapes to put 40 kilos of grapes in each of three casks of lambic. Those casks,like most of the casks at Cantillon, were typical Bordeaux wine casks, or ‘foudres’ in French, holding about 225 liters of lambic, that are bought from Bordeaux wineries after they have been used a few times.

The stems were removed before the grapes went into the cask. As the new Cantillon head brewer, Jean Van Roy, is quick to point out, this de-stemming – a process called ‘égrappage’ by French winemakers – makes the finished product considerably more expensive. But the stems contain bitter tannins, and their removal produces a more delicate and “supple” wine. A rougher, more tannic wine would likely not have mixed well with some of the harsher flavors in a lambic. (Note the contrast with other fruit beers, such as the Kriek, for which the entire fruit, including the pit, is added to the cask, lending a mild nutty flavor to the beer.) The grapes were allowed to macerate and ferment with the beer in the cask for two or three months.

The beer, now thoroughly infused with the fermented grape juice, was bottled right out of the cask. A small bit of sugar was added to each bottle to spark a little refermentation and carbonation. The result on the palate was a seamless blend of two-year (mid-aged) lambic – not as mild and sweet as a young lambic, and not as acidic and strong-flavored as a three-year-old – and a very fresh wine that would obviously, left on its own, develop a lot of character over time.

The 2001 St. Lamvinus was an irrefutable argument for quality over quantity. The grapes of Belair, though sparingly allocated, made a gigantic impression. Earlier attempts had yielded a rough, earthy, and rather odd little drink – interesting, to be sure, but not very grand. This was the first bottling of St. Lamvinus that really knocked us out.

That really impressive St. Lamvinus of 2001 was unfortunately very rare and hard to get. About one pallet’s worth, 140 cases, were produced. We received only ten cases here in the U.S. We would have kept them all for our own purposes, but were besieged with requests from knowledgeable lambic lovers, and agreed finally to part with eight cases, six bottles per case. If you were lucky enough to get one of those odd bottles, you know how good it was. If you bought one and laid it down, and are waiting for a very special occasion to drink it, you may not be doing yourself a favor. St. Lamvinus will probably hold up longer than other Cantillon fruit beers, but it is not meant to go more than two years. After a time, the lambic beer begins to get the upper hand, and the acidic lambic flavors will overwhelm the more delicate winey flavors. That’s the theory, anyway. We have one bottle left (we had to drink the rest), and will soon open it to see how it has fared. We’ll let you know.

In 2002, Jean-Pierre couldn’t get Belair grapes, and went elsewhere in St. Emilion. He was able to buy some very good grapes from the family Janeoueix, which has vineyards around Libourne, and also produces excellent wines. (Jean-Pierre points out that due to local politics, the family doesn’t have the sort of grand cru status that Belair enjoys, but its wines are quite as remarkable.) Once again, Cantillon took a roughly equal quantity of merlot and two different cabernet grapes for fermentation in the lambic casks, but couldn’t get as much of them as they would have liked. Still, the beer was, once again, superb. We received about twice as much of it as we had the year before, so there was a slightly better chance of finding the 2002 vintage out in the U.S. market. In fact, there is probably still some available out there somewhere.

The 2003 St. Lamvinus, which was bottled at the very end of the year, has just arrived in the U.S. We did taste it at the brewery in February this year, and can report that it is just fantastic. If memory serves, it had greater depth and a more wine-like color than in previous years, and rightly so – there were a few significant departures in 2003. Unable to get sufficient quantities of grapes anywhere in St. Emilion, Cantillon had to look further north, on the “right bank” of the Gironde in a generally unsung part of the Bordeaux region, around the little town of Bourg. Wines from that area can take the appellation Côtes de Bourg, and can be very, very good. (According to Jean Van Roy, they can be as good as more famous Bordeaux wines, but they are considerably cheaper just because they don’t have the name.) The brewery was able to buy a sizable stock of cabernet sauvignon grapes from a grower’s cooperative (not a name vineyard) in the Côtes de Bourg. The decision was made to use only cabernet sauvignon, leaving out the merlot and cabernet franc that had gone into the earlier batches, to give greater firmness and intensity to the brew. And, with a more ready supply, the brewery was able to put more grapes into each liter of beer than ever before. In 2003, the St. Lamvinus was fermented in eleven port casks, each of which hold about 265 liters. A full 60 kilos of cabernet sauvignon grapes went into each cask.

Perhaps a few words on grape varieties is in order. Schoonmaker describes the cabernet sauvignon as a “superb red-wine grape, responsible in large part for the great wines of Bordeaux, for California’s finest wines, and for outstanding wines from many other countries as well.” The best wines made with cabernet suvignon “are well-structured, complex, and among the longest-lived of all wines.” The merlot grape, on the other hand, though a “distinguished” red-wine grape, more often plays a supporting role in Bordeaux. “It contributes softness, fruit, suppleness, and charm to many famous wines that would otherwise be less attractive.” Cabernet franc, which also went missing in the 2003 St. Lamvinus, is described as an “excellent” grape, producing wines in a similar style to cabernet sauvignon, but lighter bodied.

This year’s production of St. Lamvinus was considerably larger than in past years, and we will have a little more than half a pallet of the beer – a tiny amount by the standards of other breweries, but still more than we have ever had before of St. Lamvinus. You should have an easier time finding it, and the price should be a little nicer, though it won’t be cheap. Our recommendation: just buy it. This is probably the best St. Lamvinus yet, made only with the weightier, more intense cabernet sauvignon grape, with a higher concentration of grapes in the mix, and aged in old port casks.

Other Beers by Cantillon