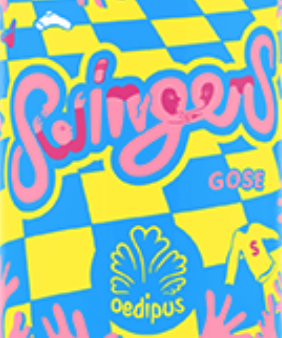 “Traditionally a Gose is a pale, sour wheat beer similar to a Berliner Weisse. With Swingers, we brew a beer similar to a Berliner Weisse using pilsner, wheat and oat malts. After filtration and sparging, the wort is soured in the kettle with lactobacillus until it reaches the right level of sourness. Then the wort is boiled and salt and citrusy hops are added. We use an English Ale yeast strain to ferment the wort.

Although coriander is traditionally used in a Gose, we wanted to try to brew one without this particular spice (especially since coriander isn’t exactly our favorite). Since research shows that coriander’s aroma compounds are transformed to citronellol during fermentation, we wanted to mimic the aroma of citronellol using hops and citrus peels. After fermentation we add different hop varieties together with lime and grapefruit peels to give this beer a real fruity flavor.”