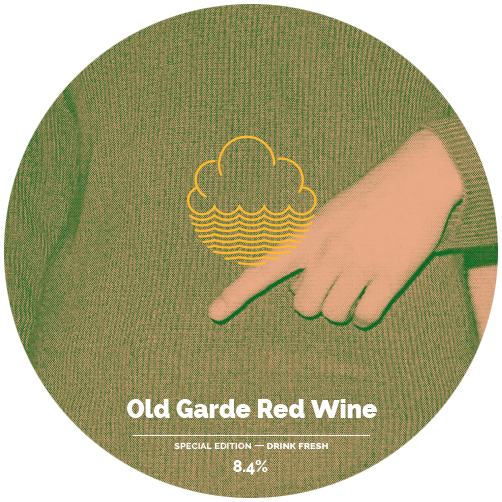 Shamelessly pilfered from the brewer’s blog (Thanks Paul!):

“Back in 1997, when R.Kelly believed he could fly, and the drugs didn’t work for The Verve, I was near the end of my teens, halfway through college, and spending most of my money on drum and bass records. Not yet legal drinking age I recall many hazy days, and whatever alcohol containing drinks the girls (who did look a little older) could buy at the corner shop: They had Hooch; I had Newcastle Brown Ale; anyone of us would have Diamond White. Alcohol containing drinks were largely nothing other than tolerable intoxicants.

At that same time, a little over 150 hundred miles away, James Campbell frequented a brew pub called The Evening Star in Brighton after his shifts managing the brewing across two brewpubs, The Font & Firkin and The Fathom & Firkin. Mark Tranter was brewing in The Evening Star, and the two met and struck a friendship over after work pints. At that time James had already been brewing for almost two years, and was charged with making ‘a 3.5%’, ‘a 4.2%’ and ‘a 5% Pale Ale’ (supposed to be flavoured only with Fuggles and Goldings, but given a lift by Cascade and Hersbrucker bought out of his own pocket, and snuck into the brewery), and the ‘5.5% Dogbolter’. Mark was brewing a fantastic range, including favourites of James’s such as Darkstar Original, a spiced Weisse, and as James recalls “impressive keg stout”. They’d talk shop and exchange brewing tips, as their love of hoppy beer developed. Darkstar were already kegging beer back then, and on the path that would lead them to the still much loved Hophead, born out of a series of single hop variety pale ales.

In the years that followed, Mark’s career saw him move from brewing in a cramped basement room in The Evening Star on a 1.5BBL kit, to eventually brewing on a three vessel 45BBL kit in Partridge Green. James left for Ireland and worked for Dwan’s, having been head hunted by Brendon Dobbin (maker of celebrated brewhouses after brewing hop forward beers at his then Manchester brewery West Coast brewing), before joining Marble Brewery in 2000.

Around nine years would pass, seeing the likes of Meantime Brewery, Thornbridge Brewery, and then Brew Dog launch, before London caught the craft beer buzz in 2009. During this time James and Mark (albeit in very different parts of the country, on different sized kits, and in companies with vastly different aims) made beers that varied between accessible and traditional to incredibly progressive. In James’s opinion, Mark’s cask Saison and bottled Imperial Stout raised the game in the UK, stretching the then dominant pale and hoppy remit of beer. Pint, Lagonda and Decadence (the latter brewed in 2012 to mark a decade of Marble Brewery) are beers James talks fondly of as modern leaning, hoppy, and characterful ales. Marble and Darkstar, or rather James and Mark collaborated first on a Saison in 2011, that was a true meeting of individuals and their respective passions in beer.

In recent years, as I’m sure you may know only too well, Mark departed from Dark Star, travelled in the USA for a while, before returning to Sussex and starting one of the UK’s most exciting breweries, in late 2013. At Burning Sky, infectiously dedicated to expressing the locale of the East Sussex barn that houses his brewery and barrel ageing, Mark produces some of the finest beer in the UK and remains impressively averse to fads and trends.

Collaborations aren’t of particular importance to Mark, who carries the skepticism of an experienced brewer that’s seen fads come and go many times before, with no interest whatsoever in cool points or cliques. So why come up to Manchester to brew with us at Cloudwater, I asked? “No offence, but I didn’t come up to Manchester because of any of you guys – I didn’t really know you, I came up because James is a friend, I was very curious about what he was doing now and I know we’ll make a good beer.” Throughout the day Mark and I talked about collaborations as James oversaw the mashing in of a 717kg grist, part of a recipe that had been exchanged and refined a number of times before they both settled on a ~6.2% Bierre de Garde. The combined effort in developing and brewing this beer is very much a celebration of a longstanding friendship amongst brewers that have been making beer long before it was cool.

In conversation with Mark we reflected on whether the true spirit of collaboration brews has been lost to many who only seem interested in collaborating for marketing purposes, rather than pushing the boundaries of what each individual would normally do. The process should evolve in a deliberate manner over weeks/months before the brew day actually arrives, as this one did, continuing and deepening the recipe development work that goes into all brews.

The brew day (making our eleventh batch of beer) was by far the shortest and smoothest we’d had up to that point, testament to James’s hard work finding his way round our new brew kit, as well as having near 40 years combined brewing experience to hand for problems that thankfully failed to manifest.

At the end of a very enjoyable and relaxing Sunday brew day three and a half weeks ago we were left with around 2500 litres of Bierre de Garde in fermenter. Much of the batch was put in Bordeaux wine barrels, we look forward to seeing how ‘Old Garde’ gets on in wood. If it’s brewers are anything to go by, it’ll only get better with the passage of time.”

Other Beers by Cloudwater Brew Co.