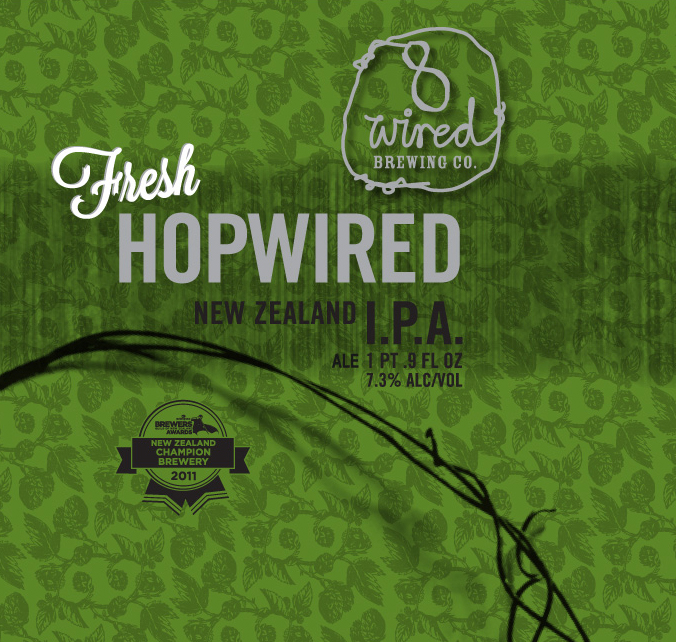 A fresh (wet hopped) version of 8 Wired’s flagship IPA, HopWired. Brewed to the same recipe but with fresh hop cones straight from the vine, harvested the day of brewing, then loaded into the brewers’ trucks, and then dumped directly into an improvised hopback. Hopwired is made with Motueka and Nelson Sauvin hops, which mature two weeks apart, so to keep the fresh hops in the wet-hopped version from decomposing, they brewed 2 batches and blended after fermentation. Normally, Hopwired is hopped with multiple hop additions in the kettle, as well as hopback and dryhop. But due to the vast amount of fresh hops (180 kg fresh, compared to 35 kg dry) some improvisation was required: The beer was bittered as usual with Pacific Jade, then the improvised giant hopback, which is usually the mash/lauter tun was filled with fresh hops. The brewers then transferred the hot wort on top of the hop cones, set it soak for a few minutes, and transferred it through the heat exchanger to the fermenter as usual. It is less bitter and slightly less aromatic beer than the regular version, but with a much bigger rounded flavor, and almost oily mouth feel. Released once a year, after the New Zealand hop harvest is in.