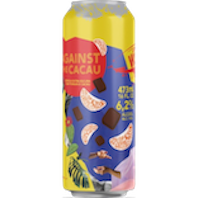 Alessandro Oliveira from Way Beer collaborated with Jerry Gnagy of Against the Grain, Louisville, KY when he was in Brazil. They decided to use tangerine in this recipe, because this is a fruit produced and well known locally, and cacao, which is part of our Brazilian historical identity. The result was Against the Cacau, a seasonal Brown Ale, with 6.2% of alcohol content and 19.3 of IBU.

Other Beers by Way Beer