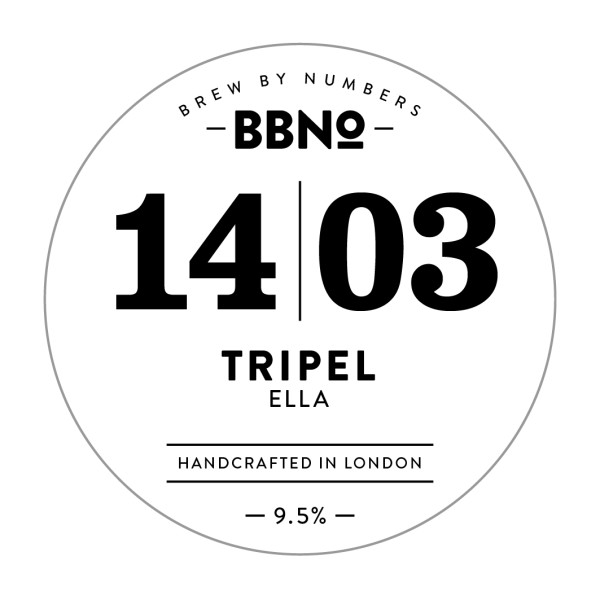 “There are a number of different theories as to the origin of the name ‘Tripel’.  One thing that is certain is that the modern use of the word came about in the 1950s when a well-known Belgian Trappist brewery renamed a beer they had developed in the 1930s.

Golden in colour and high in ABV, Tripels are brewed with Belgian yeast strains which lend the beer fruity esters and spicy phenolics.  A dry finish and relatively high bitterness ensure Tripels are more drinkable than their strength would imply. Brew By Numbers brews Tripels with a large addition of aroma hops to give them extra flavour and to bring them into the 21st century.

14|03 TRIPEL: ELLA – For our third Tripel, we’re returning to using hops from the southern hemisphere, this time using Australian hop Ella, noted for its pronounced floral and juicy fruit character. The indulgently fruity nose evokes peach and apple blossom, pineapple cocktails and tropical fruit sundaes, whilst that crucially smooth and slick Tripel body all but glides across the palate, with just a prickle of gentle spicing from coriander and orange peel to balance the beer’s yeast character.”