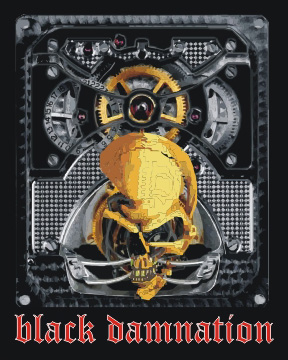 “To this day, we don’t know what we were thinking when we started doing this. But we know one thing for sure: we haven’t regretted it since. The Black Damnation series is a dark twist of Urbain’s mind, conceived as beers that neither Belgium or the world have ever seen before, nor are they likely to ever see them again. Originally intended as a range of twelve beers, it has since expanded.

The rules are simple: every Black Damnation beer has to contain at least 50% of our Black Albert or one of its barrel-aged variants. Other than that: anything goes. We’ve aged it on bourbon, whisky and rum. We’ve applied the Eisbock technique to bring it up to 39% alcohol. We’ve used the water run-off and dry-hopped it for a quaffable 2% entry. We added peaches, coffee beans and blackberries. In short: we’ve put it through its paces and we’ll continue to do so. That is: until we run out of ideas. Like that’ll ever happen.”

The series is so popular that it even has its own Wikipedia page.