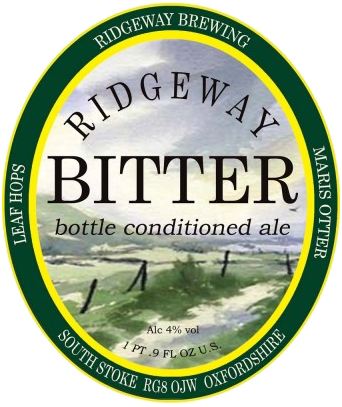 This classic English Bitter was the first beer to bear the name Ridgeway, and it is a proud flagship indeed: a perfect example of what the Brits call a ‘session ale’ – the kind of beer you can sit with and enjoy endlessly as the hours roll by at the pub. In the south of England, they call their prized ale ‘Bitter’ because, when it first appeared, it was distinguished by a crisp, refreshing hop bitterness. A good bitter is superbly drinkable, full of flavor, but light in body and not so high in alcohol. Ridgeway Bitter is in this great tradition, but it is also entirely unique.

To make it, master brewer Peter Scholey uses wonderful Challenger hops (the same variety that gives that striking floral hop aroma to his Bluebird Bitter), but then adds a very new hop, Boadicea, in the late boiling stage. Peter says that the Boadicea is perfect as a ‘late copper’ bittering hop, as it lends a terrific spicy hop quality to the beer. To be sure it comes out right, Peter personally selects the Boadicea hops that go into Ridgeway Bitter not only from a specific farm, but from a particular patch of ground on the farm. (Small details in soil composition, exposure to the sun, and more, determine the character of the hops on the vine.) Also in the mix is Maris Otter malt, the favored hop of English craft brewers. The result is perfect balance: a wholesome, slightly sweet, bready maltiness offset by a strong but subtle hop bitterness in the nose and on the palate.

The Ridgeway Brewery is named for the ancient road – passable now only on foot – that meanders along a low escarpment across the high, rolling pastoral plain that is the southwest of England. The now patchy stone surface of the Ridgeway was laid by Britain’s oldest inhabitants – Druids and the like – thousands of years before the Romans turned up to build their own roadways. It is the oldest road in the British Isles and Europe. It runs for nearly 100 miles, passing that other ancient landmark, Stonehenge, as well as Peter Scholey’s relatively modern home, along the way.

Coincidentally or not, the Boadicea hop was named for an Angle (Druid?) barbarian queen who resisted the Roman invasion centuries ago. The Boadicea hop was developed for resistance also; it is the only variety that is naturally resistant to aphids, which are the worst enemy of the hop plant. Which is why we can proudly say:

Selected as the best bitter in the world by Men’s Journal magazine, July 2005.