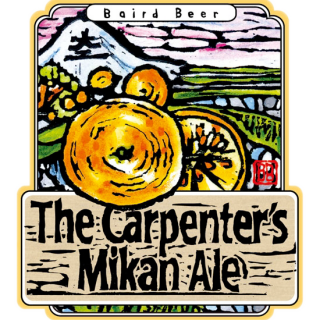 This special fruit beer originated unexpectedly, but naturally, from the earnest and genuine friendship forged between a Carpenter and a Brewer. The Brewer never intended to embark on the path of fruit ale production but was led there by the creative inspiration of the Carpenter as well as by the Carpenter’s wonderful orchard that was teeming with delicious citrus fruit. This fruit ale is inspired by the rich tradition of craftmanship in Japan – the ‘Shokunin’ spirit – which is embodied in the Carpenter.

The mikans used in this brew are fresh, succulent, and local — harvested on the land and by the hand of the Carpenter. The Baird brewers hand-process the harvested mikans, shaving off the outer skin of the peel and pressing the juice. Both peel shavings and juice are combined with wholesome, traditional and minimally processed malt and hops (characteristic of Baird Beer). The result is a product greater than the sum of its parts — as is true in the case of great human friendship.

The 2011 version of the Carpenter’s Mikan Ale is different in several respects from its 2010 predecessor. For starters, it is a darker hue of orange-red than previous, due to the use of Japanese red sugar (akato) instead of sudakito sugar. Baird brewers have also lowered the starting gravity of the wort somewhat to bring the alcohol percentage down to six. They then went back to fermenting with their house Scottish ale yeast, rather than using the American ale yeast strain of last year. Finally, they’ve added a bit more mikan juice and peels per unit of wort than in the past. The character of this year’s version is marked most notably by the succulent aroma and piquant flavor of sweet-tart mikans and their wonderfully symbiotic interaction with select hop varieties (Centennial, Perle, Cascade and New Zealand Cascade).

“All that is lasting is obtained by hard work and dedication to craft.”