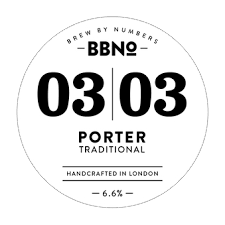 “Historically the preferred beer of ticket and fellowship porters in 18th century London, this rich dark beer became the world’s first truly global beer style, winning over the lower and middle classes before being exported around the world. The parent to the stronger, drier ‘Stout Porter’, eventually ‘Stout’, porter has been reinvented a number of times and now occupies a broad section of dark beers. Expect coffee, chocolate, liquorice, toffee, caramel, nut and dark fruit flavours.

03|03 PORTER: TRADITIONAL – Harking back to the Porters of London in the mid 19th century, 03|03 is brewed with pale, brown and black malts to give a rich flavour and dark colour. This is a beer that will age gracefully.”