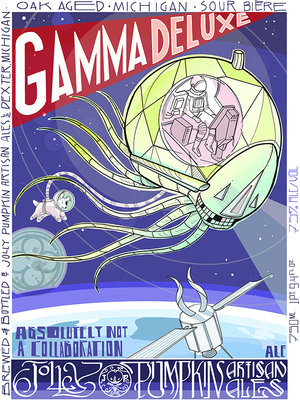 “GAMMADELUXE was brewed in collaboration with our good friends at Jester King Brewery in Austin, Texas. We wanted to share knowledge and techniques that we had acquired from Henry of Monkish Brewing Co. and with that we brewed this sour Monkish inspired IPA. This IPA pours a beautiful bright yellow with just the right amount of haze. An aroma of funky fruit tannins in the nose. Packed full of seven different hop varieties giving notes of grapefruit, light Brett characteristics, a tannin dryness, and a touch of pineapple.

Dissolving into the darkness
Upward loses its meaning

Can there be a return?