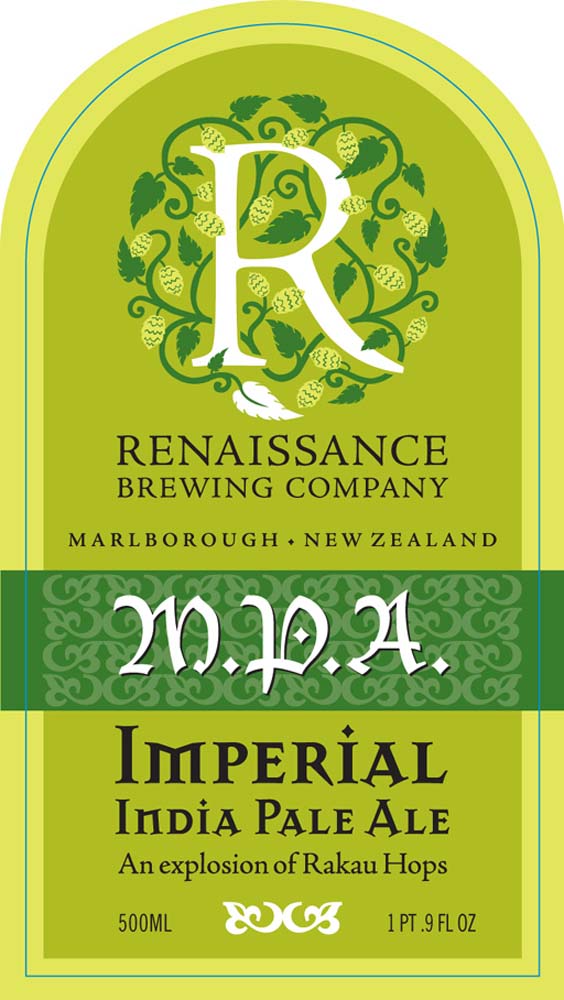 Marlborough Pale Ale, or M.P.A. for short, is a uniquely kiwi take on an American Double India Pale Ale and is the biggest beer in our range. It is also the most philanthropic as it contributes significantly to the national economies where it is sold due to its generous donations to the excise tax man!

The style is based on the Americans intention to create a massively hopped full-bodied, higher alcohol Pale Ale to showcase the bitterness flavour and aroma of their locally grown hops.

Rather than simply copying the Americans, Renaissance Brewing has taken the concept and turned it into a kiwi brew by utilising not only New Zealand grown hops but also by choosing to use only New Zealand hop varieties.

M.P.A. is a released seasonally as it uses the new seasons hops every southern hemisphere autumn. In the current vintage release (2009) Renaissance has chosen to use a single variatal, Rakau, a hop recently released by Hort Research. M.P.A. showcases the lovely piney, apricot and stone fruit flavours that Rakau is capable of, balancing its flavour and bitterness against a strong malty full bodied Ale. M.PA. is massively hopped. A normal brew has 3 or 4 hop additions, M.P.A. had 13 additions, and this yielded an ale with approximately 120 hops per bottle.

Most people are unaware of how any single hop varietal tastes. One sip of M.P.A and they will know Rakau!