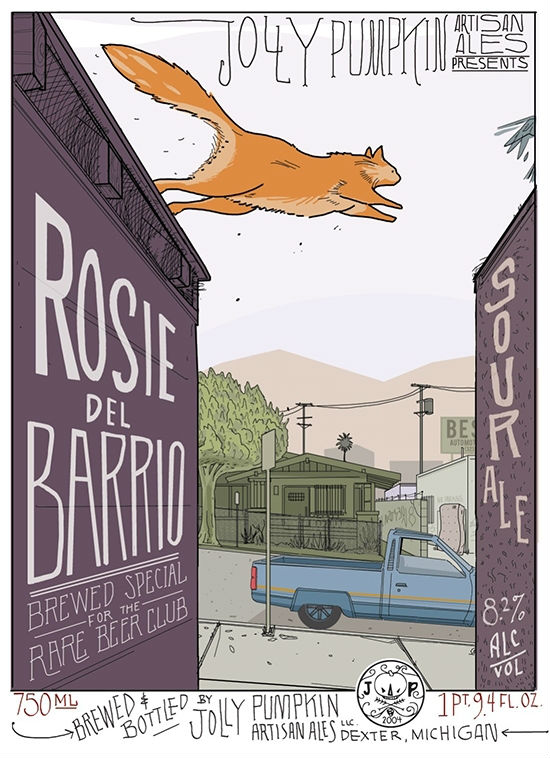 “This is the 3rd beer we have done with Rare beer club. It is always a pleasure and a challenge to work with RBC and Rosie del Barrio was no exception. I was sort of given homework to design a label based on the Rare Beer Club’s founder’s deceased cat. The name “Rosie Del Barrio” (Rosie was the cats name) was selected by a social media vote, so based on that I started working my best to not simply do a cat portrait but tell a deeper story. Quickly my focus started turning to the Barrio where Rosie lived. Seems that cats are all about their territory and how strange of an extension their territory is of a cat itself. The whole project got me to thinking about my territory or at least a once upon a tome territory for me. Pasadena and Highland Park, Los Angeles an area where I lived locally to for a decade or so. The Figueroa Corridor through the avenues of the east side of Los Angeles and that certain look it has. Aged and dusty Craftsmen homes, chainlink fences wrapping everything, miles of concrete and power lines and those hot and hazy foothills behind its all leading into the San Gabriel Valley. The whole project quickly became a sort of love letter to Rosie the cat whom I never met and LA a place that has imprinted itself on me forever.

Brewed as a tribute to Rare Beer Club president Kris Calef’s recently deceased 19-yr old Maine Coon, Rosie del Barrio is a big and unique wild red ale designed to match his personality. A complex brew, Rosie del Barrio offers brilliant lemon-cherry vibrancy in the aromatics, with the charismatic Jolly Pumpkin house yeast character appearing as peppery, crackling, and laden with tree fruit. There’s a white-pepper note and subtle toasted oak, with fruity tartness akin to red berries, plum, and peach. Elements of pear and weightier spices accent the oak-tinged amber wild ale that’s the core of everything here. It’s juicy and weightless on the palate, with the lemony brightness on the tart side feeling seamless beside vanillas and warming oak from the wood. The amber touches of this beer never veer into caramelized territory, with the closest thing being fresh berries-as this feels just super lean, with that Jolly Pumpkin yeast character taking over. A mouthwatering, lightly tart wild ale with a hint of oak, it’s one of our favorite JP beers in in memory, brimming with life and zest and intrigue-a perfect tribute for Rosie.”