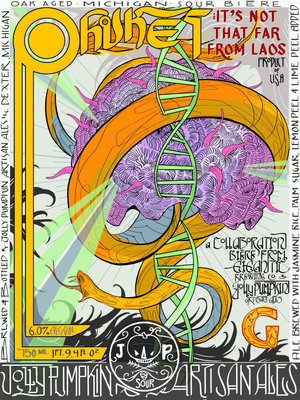 Jolly Pumpkin/Gigantic Phuket: It’s Not That Far From Laos

“A 4.5 hour flight separates Phuket from Laos, which is an hour shorter than the flight from Michigan to Portland, Oregon where the folks from Gigantic Brewing Company reside. That is why a meeting in Hawai’i led to the collaboration and creation of this hoppy, lime saison. Aromas of lime, unripe pear, and the classic pineapple tinted notes of Jolly Pumpkin funk, erupt from your glass. Phuket; It’s Not That Far From Laos is light, lively, and quite dry due to the inclusion of Jasmine Rice and Palm Sugar in the mash. The use of Cascade, Chinook, and Jarrylo hops, as well as Lime Peel, meld together flavors of citrus, pine, and white grape that linger quietly before finishing slightly bitter with mild tartness.

The next year we visited Kauai
Seeing Ben and Andrea, later
At the next festival on the next exotic isle
Ben said “Hey, we should do a collabo”
And I said “You’re in big trouble now, Ben Love”

And he was
Because
Phuket is not that far from Laos