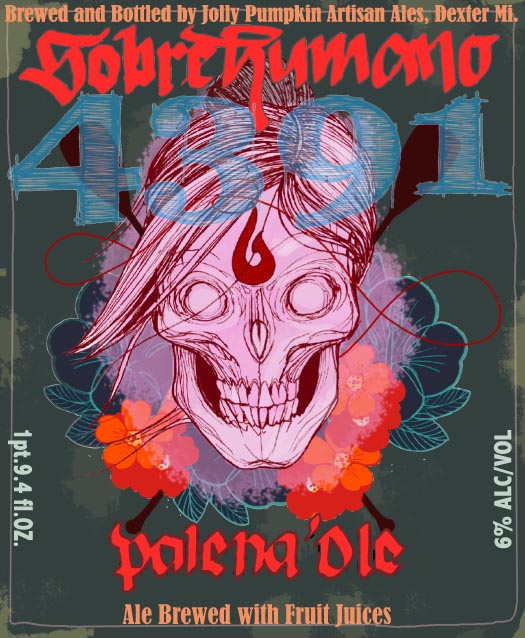 “A re-release of a favorite collaboration between Jolly Pumpkin Artisan Ales and Maui Brewing Company. Spanning the distance between Dexter and Maui (4391 miles to be exact) Sobrehumano Palena`ole connects the two noble states with the use of two noble ingredients, cherries and liliko’i. A bright, candied nose of passion fruit melds with the tartness of the cherries and brushes of oak. Foeder aged for nearly ten months in two separate vessels and blended to elicit the perfect sense of aloha.

2017 Release Label:
Sobrehumano Palena’ole;
Above human, without limits.
I can’t remember when I first met Garrett exactly, but I’m sure it began just like any other day for me. Demonic flying monkeys and bats. Brain on fire, most likely, but definitely bats.
Over the years I’ve become inspired by his cavalier magnanimousness, and seemingly nonplussed view on life.
Leading by following, I’ve re-brewed this collaborative effort between our two breweries. A recipe his then head brewer John, and I first concocted years ago. None of us completely understanding its significance, or where it would lead. But here we both are. Again.
What better describes life?
Mahalo!
Ron Jeffries, Founder and Chief Squeegee Operator

Original Label:
Yes, Michigan and Hawaii are connected. It should be obvious to you now, as you hold this beer, and read this label. John and I designed this beer with two noble fruits from two noble states, Michigan & Hawaii. Cherries and Liliko’i. Starting to see the connection? I feel it. So does John. 4391 miles may separate our breweries, but not our thirst for the exquisite. Hipa! -Ron

Working with Ron is something I’ve always want to do since I had my first Jolly Pumpkin beer. Years later, it’s a reality. Being involved on this project was an honor and a privilege. Mahalo to my MBC crew and to you, fans of craft beer! -John