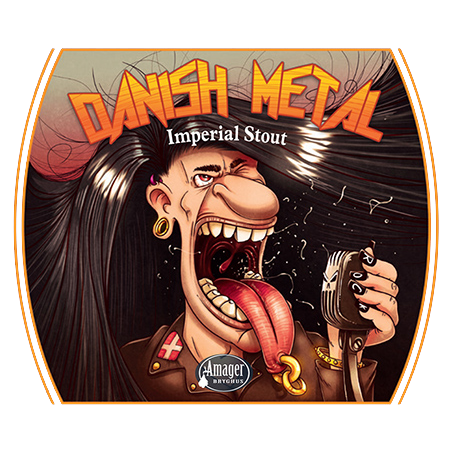 “It was a true Texan invasion when Jester King came to Amager. We honestly lost count but we believe at least 8 or 9 of these cowboys came riding in – dragging their suitcase rollers along. And we didn’t put up much of a fight since it was the day after the Copenhagen Beer Celebration party. Morten fell asleep in the malt room and Jacob pretty much fell asleep leaning against the mash tun while mashing in. René? Well, we never saw René that day. Oh yes, we were beat. Dead meat we were. Crooked Stave came by, so did The Kernel and Off Color Brewing – or was it somebody else? Sorry, we totally lost track. But Manker was here….we think. But a beer was indeed brewed in this massive state of being wasted, and a bit of a beast it is. We took the original version of Jester King’s Black Metal – the one with a British ale yeast – and gave it a bit of a Danish spin. Hence Danish Metal was born. It’s rich and potent and powerful – just like a Texas steak. Or something. But we’re babbling. We’ll shut up now. Sorry.”