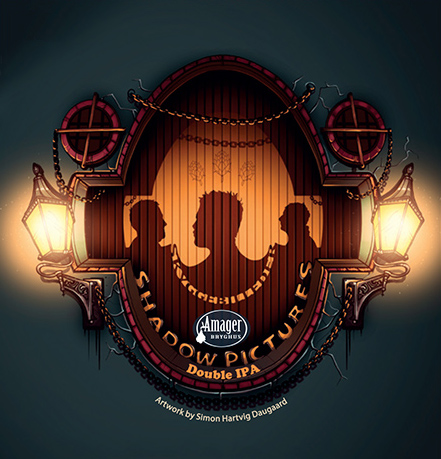 “Shaun Hill – magician, eccentric, wizard and one of the modern craft beer world’s most unique personalities. In every way a person as far away as imaginable from typical Amager frat boy mentality.

But in spite of this – or perhaps because of this – Shaun became a good friend of Amager Bryghus when he himself worked as a brewer at Norrebro Bryghus, Copenhagen a few years ago. And quite a few beers came to the light of day in the vaults of Amager Bryghus as a result of this fruitful collaborative friendship. So when we visited New England in the summer of 2013 it was only natural to pop by Shaun’s farmhouse brewery – Hill Farmstead – absolutely in the middle of nowhere. Shaun gave us a hard time for finishing a couple of kegs of some rare saison during a late night drinking session, but all of that was forgotten the next morning, when we brewed “Shadow Pictures of a Journey” (a name inspired by H.C. Andersen’s writings) – a clean almost insultingly quaffable Double IPA loaded with crisp aroma hops. “Shadow Pictures – Skyggebilleder” is our very own interpretaion of the beer we brewed with Shaun on one beautiful summer’s day in Vermont.”