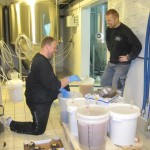 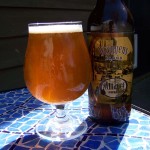 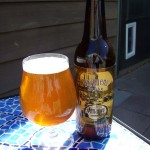 Amager Bryghus is the only brewery on the small island of Amager. Only a few miles from Copenhagen, Denmark, near the Taarnby airport, the brewery sits in a small industrial neighbourhood on this patriotic island. They have proudly named their year-round series of beers after cities on Amager.

“There is absolute no doubt that we run the safest brewing enterprise in the country as our premises used to be an air-raid shelter. Our premises have also been used for storing bibles, hence reigns an atmosphere of divine tranquility only otherwise found in Belgian monasteries. Well…

Founders of the brewery are the two friends and dedicated home brewers Mr. Morten Valentin Lundsbak and Mr. Jacob Storm, who since the opening of the brewery have achieved diplomas of their skills as they have become Diploma Brewers at the Scandinavian School of Brewing.

It is our ambition to cater to all beer lovers – every time, which is why we only use pure ingredients during the brewing process. We make no shortcuts by using artificial additives to speed or help the processes. Furthermore, we have deliberately chosen neither to pasteurize nor filter our beer as we would like to preserve the best possible flavours and aromas.”

By the way, it is pronounced AH-muh!

A keg-only birthday beer brewed for the 2 year birthday of Mikkeller & Friends in Copenhagen.